New rabbit hole! I’ve always enjoyed painting and typically didn’t get much time to do it, or if I did have the time inevitably I didn’t have the resources. Within the past five days I’ve been going at it pretty strong. Launched my Etsy store, UrbanMagpieStudio, yesterday to showcase my photography available via digital download, as well as the art pieces I’ve been painting. Now, I really need to give kudos to one of my besties, Lucy, as it was her idea for craft night on Friday. I was so excited to tap into my creativity that I started hours before her by doing a piece for my boyfriend’s son. He recently just got a full bathroom makeover StarWars style so I found it only fitting to paint one of his favorite characters. Here’s the finished piece…

Fast forward to later that evening and a few glasses of wine in my system, trying to get to the point to actually begin to put paint on the canvas is a whole ordeal in and of itself. I have to formal art training, the only painting classes I’ve taken have been two of the sip and paint group things. The vast majority of my art is trial and error. Throughout the years I’ve learned it generally goes smoother if I sketch the design out on the canvas first… at least where the darkest colors go. This makes the application much easier and precise and allows me to worry about shading in the next few steps rather than all at once. Maybe other artists do this, maybe they don’t… but this is what works for me… usually. I say usually because once I’ve had a couple of glasses of Shiraz or Pinot noir, things get a little interesting. One, I’m an INTJ… full-blown INTJ at that, two, I’m a major perfectionist. Sketching out the design to get the feel for the painting isn’t always easy, there’s a lot of erasing. The more I focus on getting it ‘just right’ the more that little tremble starts in my hand. Perhaps this is the anxiety within me, telling me I won’t get it right, that it looks dumb, that the proportions are all wrong… yada yada yada… Eventually, I’ll power through the design and complete my sketch. Very rarely do I abandon all hope and wing it with something else. Here’s the ‘bones’ of my second painting from Friday… this step is after I completed the sketch and laid the black on the canvas before beginning the shading process.

If you really focus you can kind of see just how many times I redrew the lips. Those were a pain! Next steps are shading… here’s where the fun part starts. Provided the brush is wet enough the blending comes relatively easy. Tremble or not, there’s something rewarding about getting the shading to blend appropriately to show contours in the art. Case in point:

To me, the worst part about painting is the time in between that you’re waiting for a layer to dry enough before continuing. Generally speaking, this time is spent on facebook or instagram, or munching on whatever snacky-type foods are available, and downing another glass or two of wine. Is it weird that I paint better when inebriated? Queue the next section of the piece, the watercolor-esque feel. Doing this with acrylic paint kind of sucks, but it’s still manageable and if done right looks hella cool. Here’s the finished piece:

I’ll be totally honest here… this piece was originally intended for the boyfriend as part of his Valentine’s… but I liked the finished piece too much so I’m retaining it in my personal collection. #Guilty. I told him it’s a packaged deal now, me and the painting. Since then I’ve scratched the idea of a piece for him for this particular holiday in lieu of something entirely different. Perhaps one day I’ll do a piece for him… but now is not that time. After doing this piece and consequently diving head first into this rabbit hole, I realized I could actually sell some of my art and pay for HBX ConneXt in May to cover my flight, accommodations, etc. Boom, new goal set. I’ve been creating like crazy now… let’s just hope I can get some of these sold. Here’s the rest of my five-day adventure… more to come! 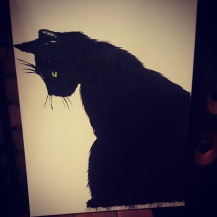 Tonight brings more opportunity to paint. Debating on taking the camera out instead of the canvas… we’ll see!

4 thoughts on “Down the rabbit hole”